A local shop had this display of balls for sale. I overheard a mother with her young daughter, as the girl was choosing a ball for herself. When the girl selected a ball with a car on it, the mother told her it was a “boy’s ball” because it had a car on it. She was also strongly discouraged from selecting the ball with Spiderman too: “That ball has Spiderman on it. Do you really want that? It’s a boy’s ball” 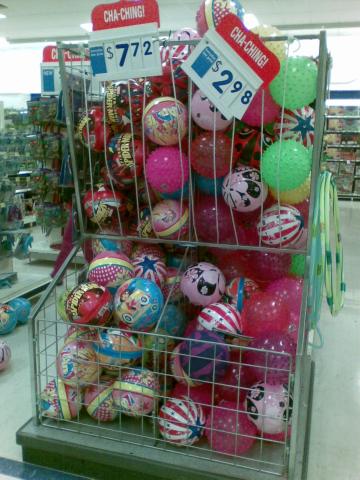 I guess we can’t have little girls playing with boys’ balls, lest they grow up forgetting their place in society.

Someone on Facebook drew my attention to this little gem.

It seems that Mr Polanski disagrees with male and female equality. Thank god he spoke out! After all, if we aren’t able to learn such valuable lessons from this bastion of morality, then we as a society have surely failed.

Which brings me to another point. Mr Polanski has copped a lot of flak for a certain scandal that occurred lo these many years ago. I must come to his defense, because I really feel that his decriers are failing to understand the complexity of the situtation.

Just imagine if he had spent years in jail for his crime. He may never have made The Pianist. That film was Great Work Of Art. He won an Academy Award for it, and his peers actually gave him a standing ovation at the awards ceremony.

So let me put it on record here that I fully support delaying punishment for child rapists for at least 25 years, to give them a fair chance to create a piece of art so great that people will say “Wow, that was totally worth raping a child for.”

It’s nice to see that racism is not completely dead in Australia.

Here is a photo I took today of a shop called Presents at Southland Shopping Centre in Cheltenham, Victoria: 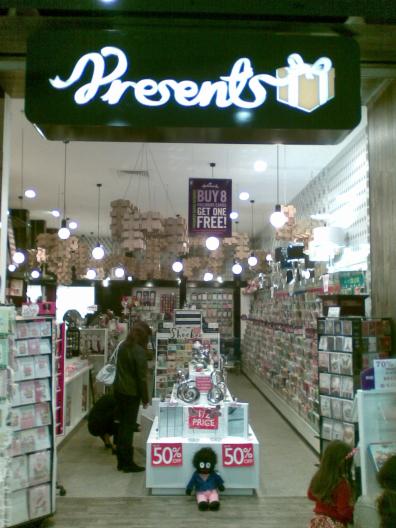 And now for a dramatic close-up: 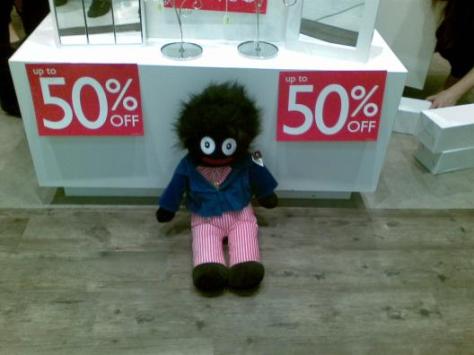 Some may argue that what is considered racist in other parts of the world may not necessarily be treated the same in Australia (remember this?). But even still, there are very few good arguments for using this as your mascot compared to the negatives.

There is a lot of debate about the relationship between cyclists and cars on the road in the media, and it makes me so goshdarn angry to see some of the stupidity that comes out of people’s mouths (or fingers, since it is mostly online).

If people would just understand one single simple fact, it would put an end to 90% of the stupidity and allow the debate to focus on constructive solutions.

So are you ready for enlightenment? Well, here it is:

The only thing cyclists have in common is that for at least one portion of their lives they are on a bicycle.

That is it, nothing more, nothing less.

It is no different for car drivers. Or public transport users. Or people who walk to work. They are all just a mix of people, with different motivations, different worldviews, and different value systems.

So can you see why I get mad when someone posts a comment like “Well, I’ve been hit by three cyclists who were illegally riding footpaths. I see every day cyclists illegally crossing at unsignaled pedestrian crossings pushing their through people trying to walk. I see them running red lights, over taking cars on the right hand side. IF cyclists really want to have any sort of repect [sic], you SHOULD odey [sic] the LAW!”

Our good friend Doug has used the powers of confirmation bias to ignore every cyclist who follows the rules. He has lumped them all together into a collective of lawless cowboys who are only in it for themselves, and decided on that basis that respect for any cyclist is not deserved. I hate to be melodramatic (well, not really) but this attitude kills people. Even if 90% of cyclists break the rules as he says, that still leaves 10% of cyclists who do not, and who do not deserve to be in a potentially fatal accident because a careless motorist feels that his right to be on the road trumps theirs. Doug is 100% right that cyclists should obey the law, but he should not treat all cyclists as if they don’t.

Every time someone like Doug repeats this view of cyclists as a lawless collective, it just perpetuates the negative stereotype of cyclists and gets the innocent ones caught in the crossfire.

Now I admit that this blog entry is mostly critical of motorists, but it is for one good reason: if a cyclist does something dumb, he or she is unlikely to do much damage to anyone but themselves (well, apart from psychological damage to some poor driver who ran over a moron). But if a motorist does something dumb, there is a too-high risk that a cyclist will be killed or disabled or severely injured. If you choose to take responsibility for controlling a ton of dangerous fast-moving metal, then the onus is on you to take extra care not to hurt innocent people.

So why do I care? Well, I am a cyclist (and a motorist, and a public transport user) who follows the road rules (where it is safe to do so) and wants to live as long as possible. I don’t want people to be at my funeral mourning a grumpy curmudgeon who died too young because an idiot in a car had the wrong attitude. Well, on reflection, I probably should seek a better poster child for my cause…

I stumbled across this blog entry from 2006 about the banana problem we were having in Australia at the time.

I only regret that I am six years too late to call that guy an idiot the day he wrote it.

Who knows, maybe he is not an idiot, but I’m going to judge him by that one post because I lack the time or motivation to do otherwise. I never said I was a good person, and I have certainly never denied being an idiot in my own special way.

His concern seems to be as follows:

3) The government refused to import bananas from overseas due to the fear of introducing pests.

Maybe he is trying and failing to criticise the government on the grounds implied in the news article he links to, which suggests that the real motivation behind not importing bananas is something to do with trade tarriffs and not biosecurity at all. At least I hope that is what he is arguing, because otherwise he is a weapons-grade dingbat.

Let’s imagine that bananas were critical to health, and we would all get horribly sick if we didn’t eat them. Then cyclone Larry comes along. Do you:

a) Let people be really sick for 9-12 momths until the banana supply has recovered and we can all be healthy again, or

b) Import bananas from overseas that bring a slew of pests with them and risk wiping out the entire banana market, leading to people getting horribly sick for ever?

I know which option I would choose.

We have to treat our bananas well; every bunch of our favourite cultivar, the Cavendish, is genetically identical. All it will take is a single disease to wipe them out entirely. Damn Interesting, one of my favourite websites, gives you the skinny on the whole scary situation.

What is the difference between atheism and agnosticism?

I am technically agnostic, though I use the terms atheist and agnostic interchangeably to describe myself. If you could provide evidence of the existence of a god of some description, then I would be happy to believe it. Thus far, nobody has. So in the absence of the evidence of any particular deity, I assume what seems the most likely scenario: that there is none.

For those people who are religious and find this agnostic/atheistic  belief system difficult to understand, think of it this way: If you are a Christian, and find Hinduism a bit silly with all of those weird gods with funny animal heads and eating rules that allow sheep but not cows to be eaten even though they are almot the same thing, just imagine what a Hindu thinks of your weird god or three that is also one depending on who you ask with eating rules that encourage cannibalism of your own god (or son thereof) through a magical transmutation that occurs once a week in church. It’s like listening to a person speak in a different language; you know that the other person knows what they are on about, but to you it is just a bunch of meaningless, silly-sounding jibber-jabber (side note: the funniest sounding language to any monolingual English speaker is Dutch, by a country mile).

Being outside religion, I find them all equally silly. That’s why I assume that there is probably no god, instead of a whacky, vengeful, yet apparently loving nutter who only raises more questions than he/she/it answers (who created god? If god could have always been here, why couldn’t the Earth have always been here? etc.). The copout answer to all of the difficult questions always leads back to the equivalent of “the lord works in mysterious ways”. This is an answer that sounds suspiciously like “because I said so” and leaves the secret three-year-old inside me – who is screaming “why? why? why?” at every mystery – wholly unsatisfied.

I always find it amusing when somebody tries to jump on a bandwagon without really understanding what is going on.

Case in point, somebody I know is doing an MBA at RMIT (the Royal Melbourne Institute of Technology, Melbourne’s third oldest university, and one that one would expect would be fairly hip to the technology jive; after all, “technology” takes up 25% of the non-conjunctive parts of its name).

One of the core subjects for the MBA is Business and Economic Analysis. One of the assessment tasks is to write a weekly blog on a range of topics relating to economics. Except that the blog must be printed and submitted in hard copy.

A blog. Printed and submitted in hard copy.

The word “blog” is a portmanteau of the words “web” and “log”. It’s not referring to this: 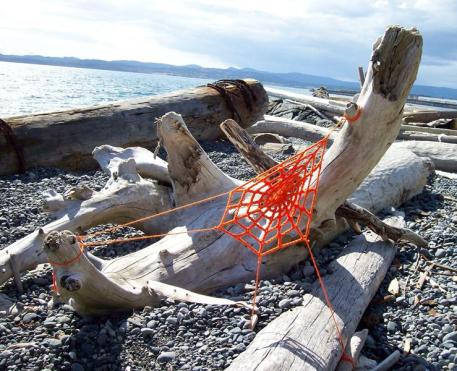 So if a web log is not actually put on the web, and is not in fact ever intended to be put on the web, is it really a web log? No, it is a journal, or an essay, or a free-writing piece, or something. But not a blog.

Why does it matter? Well, actually, it really doesn’t. It’s just an issue of semantics. The amusement factor comes from the fact that this misunderstanding of terminology is coming from a university that is supposed to be pre-eminent in the field.

Shouting at the Clouds
Blog at WordPress.com.